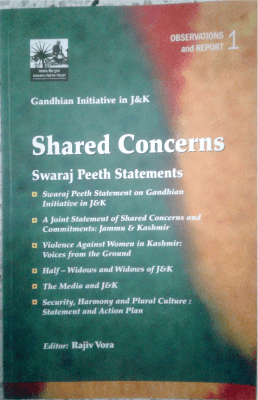 Book No 1: Share Concerns ; By Niru Vora and Rajiv Vora, Sept 2015 (limited stock)
This contains :
1. Swaraj Peeth Statement on Gandhian Initiative in J&K
2. A Joint Statement of Shared Concerns and Commitments:
3. J&K Youth for Social and Cultural Harmony
4. Violence Against Women in Kashmir:Voices from the Ground
5. Half–widows and Widows of J&K
6. The Media and J&K
7. Security, Harmony and Plural Culture:Statement and Action Plan ………… 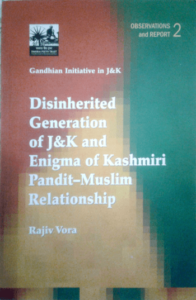 This two-part article mainly raises the issue of Kashmir Pandits’ return within a perspective of the consequences of the violent interruption in the transmission of a tradition, generally known as syncretism, plural culture and also as Kashmiriyat, to the post 1990 generations; their disconnect with their history which may be past for some but not passé; the dangers of stereotypes built by false and partial representation of reality of Muslim-Hindu relationship in J&K validity of multiple and often contradictory experiences among the Pandits both of suffering at the hands of Muslim neighbours as well as of protection by Muslim neighbours, and therefore the question of accepting the validity of multiple interpretations; limits and perils therefore of dialogue on Kashmiri Pandit
Kashmiri Muslim rapprochement grounded predominantly in politics and, similarly, in a mindset informed only by the media that tends to arrive at truth by ‘plebiscite of facts’; and, finally, the article begins rather than ends with a report of a unique experiment of bringing radical Muslim youths from the Valley to stay with displaced Pandit families in Jammu and dialogue with activist youth of Jammu – a glimpse into the hidden reality. Article is based on engaged observations and several dialogues in trust and confidence over past five years. Individual reports of some of these dialogues and visits have much more educative and informative material than in this two part article. Reports related directly are given in the appendix.
The book contains the following:

Part I: An Experiment: Disinherited Generation’s Glimpse into its Treasure
Part II: An Enigmatic Relationship: Kashmir’s Pandit and Muslims

Appendix 1: Glimpse into its Treasure: And an Answer to Nonviolence of the ‘Weak’
Appendix 2: A Joint Statement of Shared Concerns and Commitments: J&K Youth for Social Harmony
Appendix 3: The Separated Brothers by Mushtaq-ul-Haq Ahmad Sikander
Appendix 4: Kashmiri Pandits – A Community Battling for Survival : By Rameez Makhdoomi
Appendix 5: Kate Hue Jism me Chain Kahan “Can’t be in Peace with Severed Limb”
Appendix 6: Kishtwar Report: A Visit to Riot-Hit Kishtwar
Appendix 7: Security, Harmony and Plural Culture: Statement and Action Plan.
Appendix 8: Deliberation: Jammu Workshop.
Appendix 9: Dialogue with a Group of Kashmiri Pandits on Rapprochement Muslims
Appendix 10: Not a Lost Treasure: The Social Culture of Chenab Valley 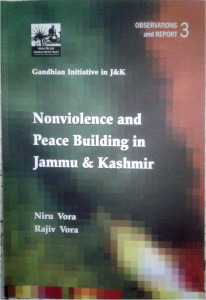 This document, third in the series, contains observations and reports about dialogues with youth and citizen both in Kashmir Valley and Jammu region on radicalization, communal and regional divide and need to create nonpartisan civil society peace infrastructure. The unprecedented floods in September 2014 got us also involved in relief work. This report shows that if someone tries sincerely, people are ready to explore nonviolent options and methods, some most unusual experience. The book contains the following:

1. Gandhi’s ‘Hind Swaraj’ in Kashmir: Part-1:Youth Leaders Affirm Nonviolence
2. Part-2: Radical Media Discusses Gandhi’s Hind Swaraj
3. Part-3: A Marathon Study Session
4. Opening up
5. ‘Take Me to that Heaven of Freedom’
6. Thinking Out of the Box
7. Dialogue Between Youths of Estranged Regions-1
8. Nonviolence in Dialogue: Ethics, Principles and Discipline
9. Dialogue Between Youths of Estranged Regions-2
10. Self-Correction Wins the ‘Other’
11. Communal Polarization is not Our Destiny
12. Call for Nonpartisan Civil Society Citizens: Meeting in Jammu
13. Community Based Nonviolent Peace Builders.
14. Creating Peace-Infrastructure
15. Travails of Villages on the Boarder
16. Nonviolent Peace-Building “No One Will if you Don’t”
17. In Defense of Justice and Human Rights:
18. Organizing Lawyers’ Forum
19. Peace Monitoring & Peace-Building:
20. Unity of Vision and Action Plan
21. Home Coming of a Terror Stricken Citizen
22. Kashmir Flood Relief 2014
23. Midnight Call: “We are drowning…”
24. “A Lesson We Had Forgotten”
25. Brave-Hearts of Samshipora
26. The Last Apple
27. Trokabal’s Issue
28. Gandhi Shanti Mitra or Nonviolent Peace Brigade
29. Qualifications of a Peace Brigade
30. Gandhi Shanti Mitra Pledge ………………………………………………………………..