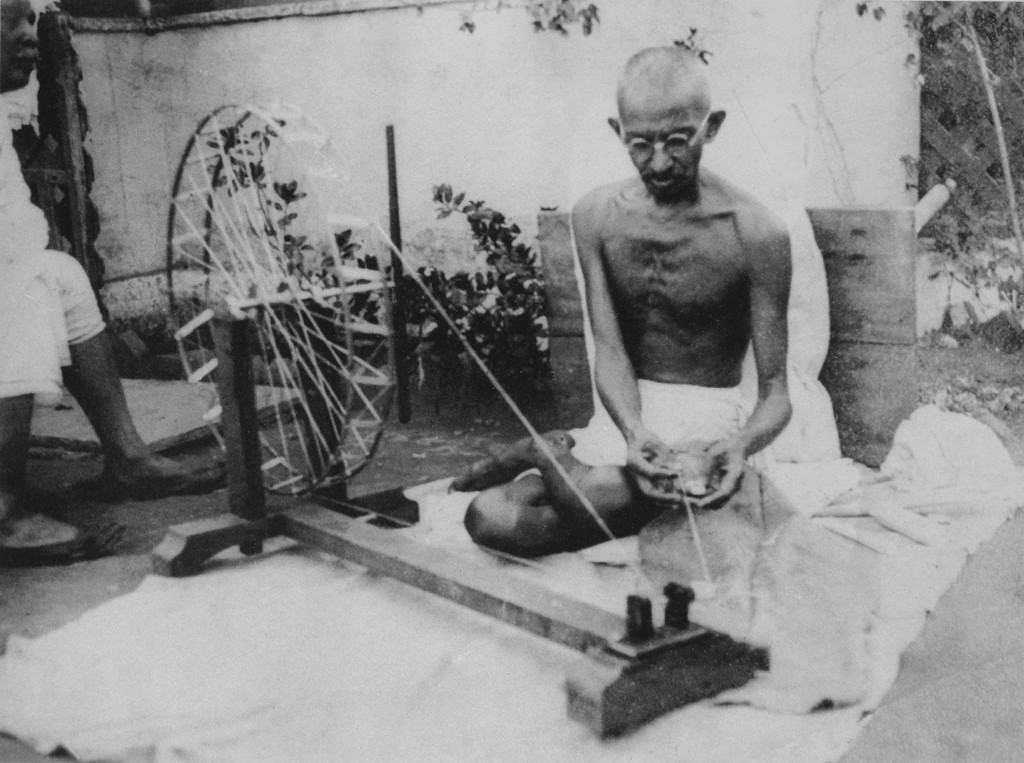 9/11 is an annual program organized by Swaraj Peeth, based in Delhi, India. It juxtaposes two powerful 9-11s a century apart, one established by Mahatma Gandhi and the other by terrorism and counter-terrorism. Swaraj Peeth has been commemorating this date in a unique way. It has created out of this a process of building up community based Gandhian peace-building and peace keeping force called ‘Shanti Sena’.

Muradabad, with a population of around one and a half million with 53% of Muslims and rest the Hindus, is known for its brass work and its export world over. More than two decades ago its name had gained notoriety due to very ugly Hindu-Muslim communal riots. Since then it has been considered communally sensitive area in the western Uttar Pradesh of India. A decade back Muslims purchased the plot of land to construct a higher education institution for Muslims whose percentage of college going students was only 4.5 in spite of their big population. A dispute started brewing over a small Hindu temple situated on the land. For eight years the dispute continued and contributed to a growing fear of communal tension. But in 2005 a group of ‘Shanti Sainiks’, a Gandhian peace-keeping and peace-building force created by Delhi based Swaraj Peeth undertook an effective peace mediation. They brought together both the communities and resolved the tension resulting in the construction of the college building. Though, in a humble way, Gandhi Shanti Sena’s intervention contributed to trust building among the conflicting parties.

Similarly, when the entire Islamic world was rocked due to the cartoon controversy mocking at the Prophet, published in a European Journal in early 2005, the Imam of the Bijnor town, about two hundred kilometers north-east of Delhi, gave a call for general strike on 24th February 2005. There was a fear that some other sections of the society would not join the general strike. This was a potential provocation for conflict leading to violence. The memory of similar incidence a decade back, when four young men each from Muslim and Hindu community were slaughtered in retaliatory violence, alerted the Gandhi Shanti Sainiks in Bijnor. They held intense dialogue with the leaders of Hindu community and convinced them that the insult of the Prophet, a divine light of one community is an insult to entire humanity. As a result of the intervention, all the communities joined in a general strike and protested peacefully. Both the communities realized how they can come closure when such irritants threaten to divide them. Both the above incidents and similar interventions by community based Gandhi Shanti-Sena in other towns and places in this area has been welcomed by people as a nonviolent social force, which harmonizes social and communal relationships and builds the capacity of the communities to resolve tensions and conflicts.

Since the Ist anniversary of ‘9/11, 2001’ Swaraj Peeth has been commemorating the day as the birthday of Satyagraha, the highest ‘weapon of nonviolence’, born under Mahatma Gandhi’s leadership in Johnsonburg on 11th September 1906. Swaraj Peeth reminded people that Muslims were shoulder to shoulder with Mahatma Gandhi in this Epochal event of birth of Satyagraha and were in the forefront of nonviolent movement against the draconian laws and racism of the colonial government of South Africa.

Swaraj Peeth brought out the relationship of the legacy of 9/11/1906 and terrorism and counter terrorism of 9/11/2001. The importance of this was not lost on Muslims in India, who, like most of the Muslims all over the world, suffered the indignity of being categorized as terrorists. The duty and the responsibility to disprove the charge that any people or any religion spreads only violence rests on those, who even being partners with Mahatma Gandhi in the advent of this epochal ‘weapon’ and in proving its absolute power over all the other weapons, have developed a short memory of their historical legacy. Self-identity is a matter of legacy a people owns up and takes pride in. People lose their caliber, power, and sovereignty when they develop short memory of the history of their empowerment and sovereignty – in this case, the history of 11th September 1906 – and enroll themselves in the history of violent marauders or conqueror’s signified by 11th September 2001.

9/11 of 1906 and of 2001 are two streams of history representing two opposing statements of humanity. Our association with one or the other of the two determines the self-image and power with which we wish to live. Our self image is our endorsement of the forces of history we cherish. Which of the forces do we empower through our endorsement of the one over the other – the one which liberate us from violence or the ones that bind us to violence and counter-violence?

To commemorate the birth of Satyagraha in the light of 9/11 of 2001 – the watershed legitimization of the politics of violence and domination – a batch of 60 men and women took pledge of Shanti Sainiks on the 11th September of 2005 in the presence of other 300 who were involved in a sustained dialogue on culture of nonviolence. Similarly on the centenary of the birth of the Satyagraha 11th September 2006, over 600 men and women who included farmers, artisans, shopkeepers, government employees, teachers and youth gathered to witness the pledge-taking of 115 from among them. They all were the participants in the ongoing public dialogue on culture of nonviolence. Maulana Anzar Shah Kashmiri, an influential Islamic scholar and Vice Chanceller of Darul Uloom Wakf, Deoband – Aisa’a biggest and the dominant centre of Islam, said, “It is a matter of great significance that Muslims have so overwhelmingly participated in this movement.” He declared, “It is my appeal to the Muslim community that they should be on the forefront of this movement of nonviolence. It is for their good.” Another leading intellectual, Dr. Saiyid Hamid, former Vice Chancellor of Aligarh Muslim University and the Chairman of the Hamdard Education Society, said, “I am positively impressed to see the presence of large number of Muslims; for, so far Muslims have been involved only in petty politics but not in any kind of enlightened service of the society. They have kept themselves away and aloof. Now, as it seems they have come forward, you will see that the things will not remain the same. This is a historical step. Swaraj Peeth reminds us how long and at what cost will you keep away from your duty and legacy?”

This campaign for nonviolence setting the grounds for Shanti Sena is based on Mahatma Gandhi’s root-text ‘Hindswaraj’. It was written by Mahatma Gandhi as his manifesto when he unfurled his epic civilizational struggle following the birth of Satyagraha. Hindswaraj defines the true meaning of freedom, justice and nonviolent way of life.

Pledge-taking is preceded by dialogue with people through public meetings followed by study sessions on Hindswaraj for selected participants who volunteer to become Shanti sainiks. Those who take pledge are then involved in training in nonviolence and conflict resolution. This process has proved to be effective in confidence-building and empowering the participants. Saleem Baig from Muradabad says “I could experience the power in Hind Swaraj, which raised India to such heights and won us freedom. I am convinced, we can once again replace hatred by love; violence by voluntary suffering and sacrifice; and brute force by soul force.” Nagendra Rathore from Biharigarh says “I was an angry and un-bending man and never knew humility. I am changing after the ‘Shanti Sena’ pledge. Now I can bend when wrong or guilty. I realize how humility brings many other wonderful changes.” Razia Bi, from Rampur thinks “people fear to intervene when there is conflict and violence. I have joined Shanti Sena and want to be trained so that at least I can intervene.” According to Abdul Mazid from Saharanpur, “Hind Swaraj carries the essential teachings of Islam, Hinduism and all the religions. It teaches the highest meaning of liberation and how nonviolence is the only path. We must therefore start by nurturing nonviolence through Shanti Sena.”

The modern world has so far invested its material and intellectual resources predominantly in the development of the science of war and violence. Had we invested similarly in the development of the Science of Soul as called by Mahatma Gandhi, we would have similarly progressed in the direction of true democracy, freedom and justice. The historical forces set in motion with the advent of Satyagraha on 11th September 1906 have since coalesced around those like Badshah khan, martin Luther King Jr., Nelson Mandela, Su Kyi, H H Dalai Lama, who have stood up for the highest moral aspirations of freedom and justice and deliverance from all or any forms of violence.