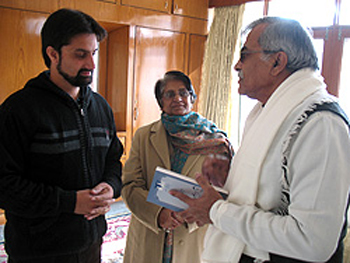 Musthaq Ul Haq Sikandar  and  Rameez Makhdoomi organized on 26th July first mini-workshop on their readings of Hind Swaraj attended by 3 women and 6 men members of Swaraj Peeth Srinagar, Kashmir. Many could not come due to heavy rains, protests and shelling in Lal Chowk after mysterious death of teenager from Maisuma in Srinagar. The symbolic importance of this initiative may not be missed, for Srinagar is not like any other place in India, in more ways than one.

I asked them why they thought they should read and discuss Hind Swaraj? Though they know of Hind Swaraj’s centrality in our work; neither Niruji nor I had ever tried to ‘sell’ Hind Swaraj to them. Three years back a young man in a dialogue with a group of youth in Srinagar quoted Alama Iqbaal on modern western form of democracy whereupon I compared that with Gandhiji’s views, which interested him much and was very surprised by what I briefly told them about Gandhiji’s stand on modernity, modern civilization so called. He asked for a copy of Hind Swaraj. Back in Delhi I mailed him a copy. After a few days what this very religiously oriented, prolific reader and articulate,  intellectually sharp college going Muslim young man,  Irtiza Ashraf, wrote back, left me speechless,  overwhelmed ! He wrote   :

“This is God’s language”.

Now as Mushtaq and Rameez , leaders in our dialogue on radicalization and other vital issues  decided after their reading of HS to distribute it to others and hold a small workshop, I asked them to write down  what is the idea? On 26 June Rameez wrote:

The reasons behind choosing Hind Swaraj as the first reading of  our group and then discuss it in our workshop is that the concept of Swaraj has dominated the psyche of common Kashmiri youth especially since the violent turmoil set its foot, the urge for Home rule has been ever greater. And we feel via Hind Swaraj – a small but broad based book – a vision towards understanding Swaraj and also the moral inadequacies of Western Civilization can be developed. Also, the essence of Gandhi’s thinking was contained in this little booklet “Hind Swaraj”.  Its theme is so revolutionary, so different!  Gandhi ji himself explains anyone who wants to understand Hind Swaraj has to view the world “with my eyes”.

In this book Gandhiji explores Swaraj and nonviolence. It is about making one’s self suffer for securing rights. It is thus opposite of resistance by arms. Gandhiji is against using brute force against enemies and this is relevant to our context too wherein bloodshed seems the only answer to all parties involved in Kashmir Conflict.

We are also studying Hind Swaraj at a time when the world of ours is witnessing the atrocious violence, the massive inequities, the extinction of native cultures and languages, the degradation of the environment from all sides and the need, urge to safeguard all this via native concepts is direly required. We will share the critical evaluation of Hind Swaraj in our workshop slated after Eid and also with you esteemed Sir.”

Those familiar with political-intellectual environment in Kashmir would easily grasp the import of this small looking initiative by a group of activist youth, writers, journalists with wide contacts with the youth, intellectuals , ideologues and activists in Kashmir. Some have their own circles of activists, writers, scholars and, journalists. Some are post-graduat research students in Kashmir University. Most of them have been part of a number of dialogues we conducted in Jammu and Srinagar. They and we have come a long way. We used to be encountered bluntly “why are you here?” “Who sends you?” Now there are phone calls “ when are you coming Sir?, “ Bring Auntie  with you” Till two years back, which means for initial three years,  we used to get signals: “ we are watching you, testing you!” That was normal. What was abnormal was the palpable air of suspicion among them itself. Two unfamiliar Kashmiri young men would not trust each other sitting around a table. “One doesn’t know who is working for whom” “there are agencies and agencies working here against each-other.” Senior academics and intellectuals would also lament that there is no forum where the youth can meet in trust and confidence, speak up their mind freely and fearlessly” “If they meet as a group, they are suspected.” “Nowhere they can open up, even meet for discussing issues of larger human concerns.” A bright, spirited, fiery young man with bitter experience of “India” and “Indians”, brought to one such interactions by Rameez, started with belligerence and offence, but ended the other day with :  “ I found a place where I could speak without fear or suspicion, I am with you, uncle.”  He, Tajamul, would phone every week. He is a part of the group since.( see “ Take Me to that Heaven of  Freedom…” www.swarajpeeth.org Many others, similarly. A young post-graduate English literature lady student, Maria Mushtaq, a poet, wrote a beautiful poem on her first experience of such a dialogue in Srinagar.

Much credit goes to Mushtaq and Rameez in Kashmir for ‘testing’ us and then patiently organizing dialogues with youths and interactions with many an important people, ideologues and leaders of the past and the present. These two exceptionally bright, well-read, well-thought, well-connected writer-scholar-journalist-activists with a sense of higher purpose are pivots of our engagement in Kashmir. I once asked Mushtaq and Rameez , who are an inseparable team, since how long they have been such good friends and how did they become friends though temperamentally so different?  And came the astonishing answer from Mushtaq ‘Sir, it is you who brought two of us together!”

We must have over the past five years organized more than a dozen dialogues in Srinagar alone, other than those in which Sringar youth were brought to Jammu to interact with Pandits and Jammu youth. Two years back they themselves asked to continue to meet as Swaraj Peeth Kashmir chapter. They are around twenty of them with 6 very articulate,  bright women.

This brief report is as a matter of record; and, to indicate a general direction of appreciating Hind Swaraj , its central theme. Rest is a matter of further exploration and informed debate about the issues of modern sciences and technology. And, above all it is the initiative in a Kashmiri context which matters the most, –  Hind Swaraj basically being a dialogue with “the school of violence” on nonviolence and Freedom.

Saima Shah termed the reading of Hind Swaraj an enlightening experience. According to her it lays down importance on passive resistance – nonviolence and Satyagraha- and of maintaining human values while fighting for justice. Partition of Bengal became a watershed for India in achieving independence.

KousarJan also termed the reading as an overall nice experience. She thought Hind Swaraj lays thrust on defining the term Swaraj more according to local needs , culture and history.

Mushtaq Ul  Haq Ahamd Sikander laid the broader framework  and why he thought it was Hind Swaraj should be studied and debated. Mushtaq thought HS was more a critique of civilization using religious paradigm without naming the same. While criticizing machinery Gandhiji knows   that Charkha itself is machinery. Mushtaq praised the book for laying the emphasis on sacredness of human life. The book is relevant even today. Its references on newspapers and media especially their role in creating vibes is so true today. Mushtaq agreed with Gandhiji’s that faster mode of travelling was wrong. People are visiting holy places and thus ruining holiness.

Rameez Makhdoomi praised the book on several accounts. First, for recognizing the role of ancestors in any righteous movement; secondly, for seeking cooperation of other side for every noble cause, for example, cow protection; and, for commitment not to meet brutality with brutality. However, Rameez , on critical side,  stated that while attacking doctors in the book Gandhiji seems to be overhyping the realities and linking the diseases to just overeating and greed of soul and calling their intervention somewhat fatal. Gandhi seems to be unacquainted of diseases and ailments that are caused not because of overeating but by pathogens and parasites. He also deliberately doesn’t talk about two great medical inventions, vaccination and pasteurization that saved millions of lives in the times that Gandhi lived in. Gandhi ji also does not seem to talk much on violence perpetuated in the name of religion. He talks  more about faults of western civilization.

Kaiser and Tajamul took the book for reading.

In the workshop it was decided:

With inputs from Rameez Makhdoomi

In one sentence: Hind Swaraj defines freedom in terms of nonviolence in all the departments of life, it is a dialogue that transformed violence into nonviolence…